Lure Love is winner of two awards from the Association of Great Lakes Outdoor Writers!

Fishing spoons are concave on one side—curving inward—so they catch water and wobble. How a spoon wobbles depends on its shape and thickness. The deeper the spoon, the wider it wobble in the water. The flatter the spoon, the less it wobbles. And longer spoons wobble more than shorter ones.

The spoon is one of the oldest fishing lures. Nordic people have been making spoon lures since the eighth century and they may have been used way before that. They’ve been made from iron, bronze, copper and even seashells.

In the United States, Julio Buel re-invented the spoon in 1834. He was eating his lunch in his boat one day and accidentally dropped a spoon overboard. As he watched it sink to the bottom, a huge fish came up and chomped it. He went home and cut the handle off another spoon that he “borrowed” from his mother. Eventually he made more spoons and had it patented.

The first fishing lure I ever owned was a spoon. It was a silver Thomas spoon with a rainbow trout pattern on it. It

was 1-1/2 inches long and made to catch trout. They still make the exact same spoon today. It’s called a Thomas Buoyant Minnow and it was patented in 1946.

My dad bought that lure for me before opening day of fishing in Massachusetts. He purchased it at an auto supply store called Western Auto, across the street from his office. They had a small fishing section. In fact, they even had some of their own fishing tackle—rods and reels and minnow buckets under the brandname Revelation. My first tackle box was a green Revelation tackle box. They sold toolboxes, too, so I guess it was pretty easy for them to cross over and make tackle boxes. You can still find a lot of Revelation tackle being sold on e-Bay.

In 2020, a company minted a coin that is a replica of the Buel spoon. It has a single hook on it. The silver spoon weighs a half-ounce and the gold spoon weighs a tenth of an ounce. On one side of the spoon it says Legendary Lures with a picture of Julio Buel. On the other side it has a picture of Queen Elizabeth II.

The crazy thing is the promotional video shows a modern-day guy fishing. The value of the silver lure is about $100 and the gold one is $350.

Would you cast a $350 spoon into deep cover or would you be afraid you’d lose it? If I ever owned one, it would remain safety at home. Losing a large fish might give you a bad feeling but nothing like what it would be like to lose a $350 lure! 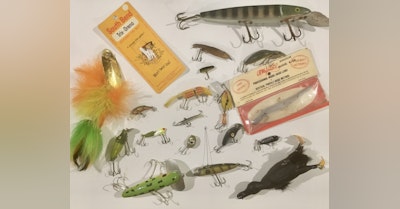 How I got a ton of FREE fishing lures (and how you can, to…

Goal: See if I could get a bunch of vintage fishing lures that I could fish and report on for the Lure Love Podcast AND for it not to cost me any money. … 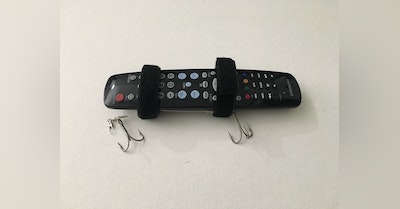 Turn your remote control into a lure!

New from the Lure Love Podcast, it's the Anything Lure! (I always wanted to invent a fishing lure.)

Subscribe to our FREE e-newsletter and you'll automatically be entered for our give-aways and also be updated when a new episode comes out!